Florida to be Receiving High Winds From Hurricane Irma

Hurricane Irma, currently located approximately 20 miles east of St. Thomas and 90 miles east of San Juan, is moving at a steady pace toward Florida according to foxnews.com.

A mandatory evacuation has been placed in effect over Broward County as the near 175 mile an hour winds near the southern tip of Florida according to abcnews.go.com.

Florida Governor, Rick Scott, warned the public that the nearing hurricane would cause a “significant storm surge,” on the lower parts of Florida, like Broward County, as reported by google.com.

Hurricane Irma has been reported as the strongest Atlantic Ocean Hurricane ever recorded. “Hurricane Irma is stronger than the last Category 5 storm to hit the state,” stated Florida State Governor Rick Scott, according to foxnews.com.

“Irma is forecast to begin impacting the Florida Keys as a devastating hurricane by Saturday,” stated Scott, “Do not focus on the exact path of this storm. A storm of this size could have effects statewide and everyone must be prepared.”

Four shelters with a capacity of  about 2,000 residents each are being erected today on September 6th, according to foxnews.com. 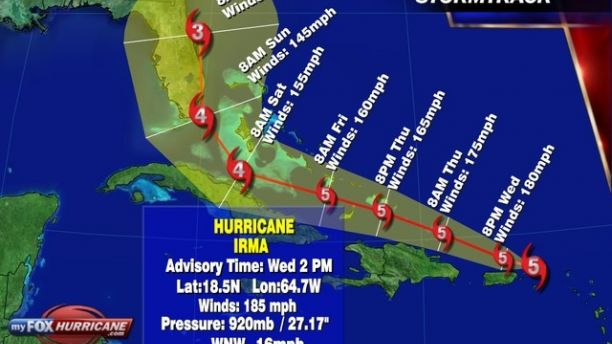