The Syrian Military Forces are reportedly shooting civilians on sight in their homes as they try to take the Western part of the rebel held city, stated CNN.

An estimated 100,000 people still trapped in Aleppo, while there are 82 confirmed civilians, mostly women and children, were found dead in their homes. This has prompted an emergency meeting of the UN Security Council stated abcnews.go.com.

“Reports of executions and disappearances in Aleppo horrifying,” the UK’s Permanent Representative and Ambassador to the UN, Matthew Rycroft stated. The Syrian Regime is in control of most of the Eastern side of Aleppo, and are moving to take the whole city, said The Washington Post.

The rebels hold less than 1 square kilometer in Eastern Aleppo, and are under heavy fire.  An estimated 100 children trapped in a locked building under heavy attack was stated by a doctor on the scene, as reported by CNN.

The rebels have held the city for four years, and retaking this city would be a turning point in what is being called the “Syrian Revolution,” Aleppo is marked as the heart of Syria and by taking this city, the Syrian Government would have control of almost all of Eastern Syria, reported CNN. 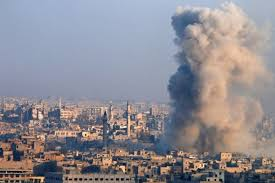