A one year old manatee has found a new home in the Cincinnati Zoo.

The little manatee arrived April 24th, and was rescued in Florida waters earlier that month. Her mother was struck by and boat and sadly did not survive the tragic accident, according to mnn.com. The three males arrived in October, the year before.

Weighing around 250 pounds, a female manatee has safely arrived at the Cincinnati Zoo.

The team at the Cincinnati Zoo is pleased to see that the four young manatees are getting along great, and are swimming side by side after being introduced earlier that day.

Orphaned female will rehabilitate along with three other orphaned male manatees.

The little female will be named Daphne, after Daphne Sheldrick, who was a legendary conservationist. The name was chosen by the zoo staff, and with the help of the Ohio family that recently rescued a young male manatee while vacationing in Florida, stated by nkytribune.com.

The three other males are named Miles, Matthew, and Pippen. Miles and Matthew will be released back in Florida water in winter, while Pippen will stay another year to gain more weight before returning. Dr. Campbell, a caretaker at the zoo, says that Daphne will be good company for Pippen, according to nkytribune.com.

Currently, Daphne is getting along great with the other manatees and the team at Cincinnati and is pleased to say that the manatees are interacting and there are no troubles so far. 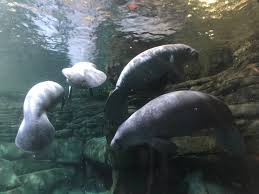